Get fresh music recommendations delivered to your inbox every Friday.
We've updated our Terms of Use. You can review the changes here.

by Metrical Dimensions & The Creeping Man 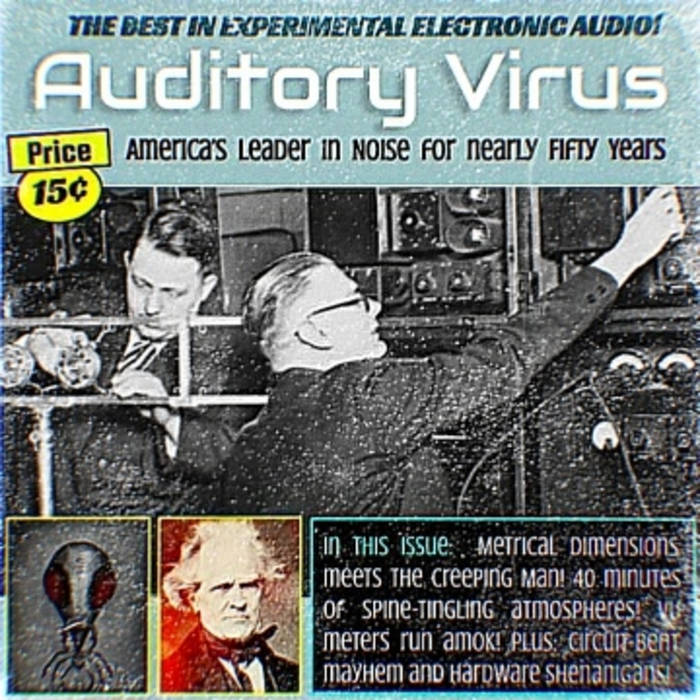 THE ALBUM, BOTH DIGITAL AND CASSETTE, IS AVAILABLE AT THE METRICAL DIMENSIONS BANDCAMP PAGE: metricaldimensions.bandcamp.com/album/auditory-virus

Metrical Dimensions (otherwise known as "Kretch") met The Creeping Man (otherwise known as "The Creeping Man") at a guerrilla experimental sound symposium in the backwoods of Ketchum, Idaho in the fall of 2014. They were blown away by each other's Revox G36 T-shirts (Revox: Swiss manufacturer of high-end reel-to-reel tape decks), and became fast ​acquaintances. Despite a severe language barrier--Kretch refused to speak anything but Klingon the entire weekend--the two agreed to collaborate on a sonic adventure at some point in the future.

A myriad number of distractions kept the two from joining forces over the years, however, including lockjaw, amnesia, scurvy, three warrants, two high-speed car chases, and a delay where one participant was sidelined by the doomsday/Dada cult The Sons of the Daughters of the Interdimensional Association of Eternal Sound Poems.

A happenstance second encounter within a roadside work crew responsible for picking up roadkill alongside Highway 89 on the outskirts of West Thumb, Wyoming in 2020 rekindled the idea; after some serious delousing and a trip to an area garage sale where the duo found a dilapidated zither and the remnants of a bagpipe, the two set to work on an experimental masterpiece.

The two quit their day jobs--Kretch had a Kombucha SCOBY reclamation startup, while the Creeping Man worked for a small but efficient toadstool business in the upper Midwest. They squatted in an abandoned grain silo floating "somewhere along the 34th parallel north," set up their limited gear, and set to work.

Perhaps unsurprisingly, the grain silo sunk to the bottom of the Atlantic, destroying their studio, and in the process and sending five months' worth of recordings to a watery grave. Undaunted, the duo forged ahead, selling plasma twice weekly until they had enough money to purchase a refurbished Macintosh Classic personal computer. With a new studio ready to roar, in one marathon recording session, Kretch and The Creeping Man created Auditory Virus with nothing more than a few contact mics and massive quantities of Flamin' Hot Cheeto powder.

Set your loudspeaker to 11 and let 'er rip!